Topic: If Architects Had To Work Like Web Designers... (4 replies, posted in General discussion)

and what does the source look like when you view source on a preview?

did you make sure to add

to the head section of your template?

if you did, then check to make sure all the code is correct (view page source).

there's a link for delete multiple messages.  once you click on it, it puts the checkboxes next to the messages and lets you delete them all in one pass. 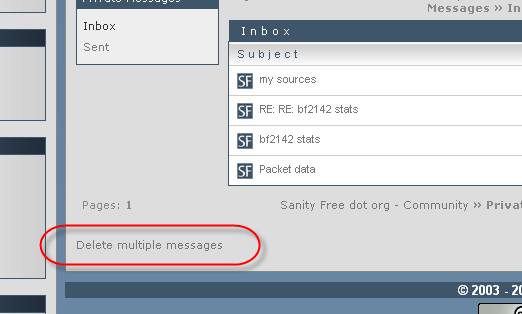 add the script section to the head of your include/template/main.tpl.

open up include/parser.php  scroll to the bottom and add:

then look for function parse_message.  inside that function, scroll down till you see: // Deal with newlines, tabs and multiple spaces then after it add:

then save or re-upload the altered text back to the server.

Re: What is actually a "NULL byte"? (14 replies, posted in Programming)

\0 isnt an escaped null, it is the null char.  same way \r or \n is line feed and newline.

echo "test \0 test"; will print both tests and will not assume \0 to be the termination of the string.  I think where the problem comes in is where php wraps the normal platform sdk of the machines they're on.  they pass the functionality through.

echo 'test \0 test'; will print the backslash and 0 as 2 seperate characters.

Go to forum: Programming Go to topic: What is actually a "NULL byte"? Go to post 182

grub has always just seemed easier to me.  I am too dumb to figure lilo out (though it seems like it should be painless)

I seem to remember running grub-util (or something like that) to resetup my boot partition a couple of times (like when I removed the windows partition, then a little while later for school when I had to re-add it and windows wiped the boot sector).

wow, transgaming has changed in my absense (I had no clue what Cedega was...)

I'm sure you can pick it up on any torrent site.

the cvs may not have the base wine libs checked into the repository.  you may want to check what dependencies they have and make sure to download / configure those dependencies.

sounds like you're missing the wine so's that it uses.

Re: What is actually a "NULL byte"? (14 replies, posted in Programming)

while I dont know exactly what the null byte problem was, I'm fairly sure it wasnt an sql injection.  it sounded to me like it could cause php files to be overritten or something like that.

Go to forum: Programming Go to topic: What is actually a "NULL byte"? Go to post 185

the thing about getting something from cvs is that it may not be working...  not everybody has a "dont check it in until its finished, tested, and working" policy.

ximian desktop (pre-novell) had a tight looking gnome (v1) desktop.  copying over a few fonts (from windows) made it look really nice.  I'd have to say my redhat 6.1 setup w/ transgamingX was the best.  I could enjoy free software and still play CS.

wow, font support is like a million times better!

guess its time to break out vmware and get me an umbuntu setup.

I havent played w/ linux since like version 2.2 or something.  I loved ximian desktop... too bad redcarpet isnt a free app anymore.

yea, the line numbers may be off though.

[OFF TOPIC]
Every time i worked on PHP i found my self in Delphi, i hate that.
[/OFF TOPIC]

LOL! perhaps you should include delphi support so you can edit your editor in the editor.

to be honest i am not shure if i agree or disagree with you madhater...

does it have to be necessarly like that? maybe. I confess i dont have enough experience to give a more complete opinion.

Maybe its the whole conception of punbb that is beter. It was made to be light, cleand, simple and fast. And it is. Being developed by one person might be the best choice after all. Then with small contributions from here and there it gets awsome. After some time it got more complete without sacrifying simplicity and speed. And if you want you can hack it or install this or that module.

I remember when it didnt have an avatar for example. Rickard then took the right decision of including it in the default instalation instead of getting stucked to his initial idea. This is just a small example about punbb good way of being.

phpbb tryed to be the most complete forum software and compete with vbulletin, but then they lack basic features like a proper user control panel.  Then invision came, then smf got so much more advanced... well... phpbb it had its time... maybe when version 3 is out... i myself dont even know really what to expect for version 3.

Punbb its by far the faster phorum system, it looks cool in its basyc instalation,  its code is dead simple to understand, it's costumizable, and besides all that now it got complete.

sorry to all the dudes found of all other board systems open source or not, punbb just rocks.

PS:punbb is made in sweden, i love that, for personal reasons

there will come a time when Rickard will be too busy to fuss with this app anymore.  then somebody else who has time will change it, maybe keep it alive, whatever.  They will have ideas that Rickard would have never put into the app.

long story short.  If / when that happens... its code base will look exactly like the others.  one thing that keeps this code base simple (in my opinion) is that it lacks a "template" system like all the others have.  fine by me, css themes are better IMO.  Adding this and that (templates, feature x, feature y) complicates things.    The larger a feature set you support, the more complex your code grows.  the more complex your code grows, the more difficult it is to understand things.

I only say this because I have been there, done that.  The saving grace for this system is that Rickard intentionally keeps the app simple.  He has said he doesnt want a full blown system like corporate systems.  Let the community muck their own instances up, but keep the distro clean and simple.

I've been around systems development lifecycle enough to know how it works.  like leaves falling from a tree, over time things get scattered... unless you constantly rake them up.

keep in mind, that phpbb has been out for a long time.  any codebase that has maintained for as long as phpbb has is going to look ugly.  features are added, bugs are fixed and not all by the same person.  that makes for ugly code.  punbb has a small development staff and unless large development efforts do peer reviews, and have one person who cleans up the code as a final pass before testing, any code will look that way.  the more developers you have on a project, the more disconjointed a code base will look.  Right now its just Rickard and Paul, and version 1.

I agree that their codebase is nicely thoughtout and concise.  and thats one thing that makes it a pleasure to work with.

woot.  that fixed it!  I missed that original post but thanks for pointing it out.

I dont normally use IE but previewing the site (this one) in it looks fine to me.

I dont get it here, but I get the same problem el bekko says on my site.  I have rc1.

hrm... took a few times of reading to understand that.

select first, then update or insert.

you should be able to create a function that would take care of it.

you really should not store the units in your ship table.  create a table or two to link units to type (if thats needed) to ship.

Re: What pass encription does it use? (13 replies, posted in PunBB 1.2 modifications, plugins and integrations)

Go to forum: PunBB 1.2 modifications, plugins and integrations Go to topic: What pass encription does it use? Go to post 198

most companies I've worked w/ have used the notation © first pub date - current date.  I dont believe there's a wrong way to do it.

Re: What pass encription does it use? (13 replies, posted in PunBB 1.2 modifications, plugins and integrations)

not that it really matters, but if you can use sha1 you should.  its faster an harder to crack.

Go to forum: PunBB 1.2 modifications, plugins and integrations Go to topic: What pass encription does it use? Go to post 200